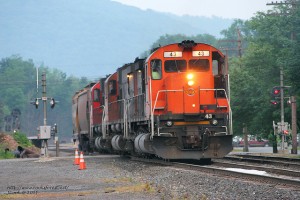 In 2014 there was an increase in the number of pedestrian casualties on railroad tracks in Missouri. According to a recent news report in Semo Times, 20 pedestrians were killed on train tracks in Missouri in 2014. That is a 25 percent increase from the previous year. Collisions between vehicles and trains remained the same with 48 crashes and two fatalities.

Trains take a long time to slow down, so if you are walking or driving over a train track, you must make sure a train is not coming. When driving over train tracks: END_OF_DOCUMENT_TOKEN_TO_BE_REPLACED

Federal investigators determined this week that erratic shifts and sleep deprivation may have played a part in a collision between two freight trains in May 2013 in southeast Missouri. According to an Associated Press news report, the accident occurred when a Union Pacific freight train pulling 60 cars hit a 75-car Burlington Northern Santa Fe train at the Rockview intersection. The collision resulted in derailment, a fire, and an overpass collapse in which five automobile passengers were injured. END_OF_DOCUMENT_TOKEN_TO_BE_REPLACED